I have been in Cambridge around two weeks ago, 2nd to 7th April, and I have spent a great week there.

I arrived on Monday at Stanstead airport, where Martin (G3ZAY) picked me up. We drove to Dom (M0BLF) who has been my host for the week. We had dinner and then it became late. I had some strong tea, which proved not to be the best idea I ever had. With a little bit less sleep than needed, my first day in Cambridge was about to begin.

Tuesday morning began with Martin (G3ZAY) taking me into Cambridge. Dan (M0WUT) showed me all the sights and I made same great photos.

Then, after lunch with Martin (G3ZAY) he had taken me to the Secret Nuclear Bunker in Kelvedon Hatch, which isn’t secret anymore, but „a large underground bunker maintained during the cold war as a potential regional government headquarters. Since being decommissioned in 1992, the bunker has been open to the public as a tourist attraction, with a museum focusing on its cold war history.“ (Wikipedia article). Unfortunately I do not have photos from there as it is forbidden to photograph in there. Some photos can be found on the internet, though.

In the evening I had the chance to make some contacts in the UKAC 144 MHz contest with the Camb-Hams. We drove on a small hill and had some fun there.

On Wednesday, I went to the Imperial War Museum in Duxford with Martin (G3ZAY) where I’ve seen a lot of planes.

Martin (G3ZAY) had then taken me to Ely where we looked at the Cathedral. Admission was too expensive, we decided. 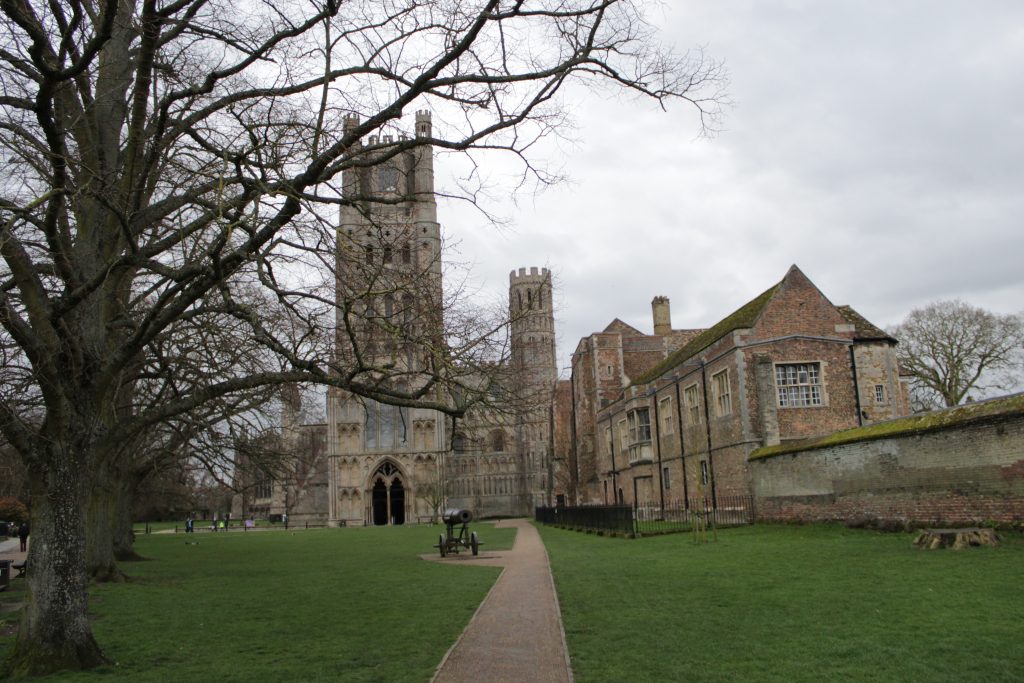 After having looked at the cathedral, we walked back to the car park and then met Michael (G7VJR) at his company and had a chat accompanied by a cup of tea.

In the evening we then went to the Camb-Hams Pye & Pint. That’s basically around 30 radio amateurs meeting in a pub eating good food and chatting about their hobby. A great evening.

On Thursday, I was taken to the RSGB’s HQ in Bedford by Richard (G4AWP) where Steve (M1ACB) gave us a cup of tea and a tour of the HQ. Then we drove to Bletchley Park, where I met John (2E0XLX) and we walked around and visited all the huts. Bletchley Park is where the codebreakers in WWII broke ciphers of the Nazis and helped to end the war much quicker. Today it is estimated that it could have shortened the war by some years. Maybe you have heard of Alan Turing, the man who built the Alan-Turing-Bombe which made decoding the ciphers of the Enigma, the cipher machine used by the Germans, possible in the first place. You can even see the Teddy Bear of him.

GB3RS: I made a few QSOs at the clubstation in the National Radio Center. 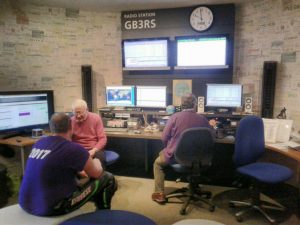 In the evening, I watched some Torchwood episodes (season 2, episode 6 „Reset“ and episode 12 „Fragments“), as well as the Doctor Who special The Day Of The Doctor at Rob’s (M0VFC) with Dom (M0BLF) and Martin, (G3ZAY).

On Friday, Martin (G3ZAY) took me to the Ofcom listening station (PDF, link now dead), where Gavin (M1BXF) joined us. Jenny (G0VQH) gave us a tour of the antenna farm. Later that day, Martin (G3ZAY) took me to the Cambridge Centre for Computing History. It has been interesting to see all those old computers. But most of the exhibiton was about gaming over the last decades, which wasn’t really interesting to me. In the afternoon, I went to the Prana Indian Restaurant in Cambridge with Dom (M0BLF) and Lawrence (M0LCM). That was the first time I’ve been to an Indian restaurant. We then went to the Cambridge105 studio.

So long, and thanks for all the fish. – Douglas Adams

I then had to leave on Saturday. My plane was on time and I left the UK around midday. 🙁

I hope to come back to the UK.

You are all amazing!