#hamradio2017: See you again next year in Friedrichshafen

Also this year it has been nice to meet so many great people from all around the world. This year I stayed in the HamCamp again, this year organized by Gerrit, DH8GHH (thank you!) where meeting great people started. 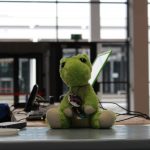 Mr. T-Rex has been at the information desk of the HamCamp most of the time.

Friday, 9 a.m. I went to the opening of the Ham Radio. The mayor of Friedrichshafen talked a bit

The mayor of Friedrichshafen at the opening of the Ham Radio.

about the impact the fair has to the city every year and IARU president Don Beattie, G3BJ, covered the spectrum challenges of today, and IARU’s role in working for the future of amateur radio A bit later DARC president Steffen Schöppe, DL7ATE hands over the Horkheimer award to Fritz Markert, DM2BLE. Fritz has done a lot do make calculations needed for german amateur radio stations a lot easier.

After the Ham Radio had officially opened I went to the stand of the federal network agency and asked them if they could use some help in the amateur radio examinition and then they told me to come. Before I helped at the examination, I went to the RSGB stand and drank some really good tea there. Steve, M1ACB, told me tea had to be drunken with milk so I decided to give it a try. Thanks for enlighten me, Steve!

IARU president Don Beattie, G3BJ talked about the importance of the work of the IARU.

Then I went to the examination and helped a bit there. I then asked the organizer of the american amateur radio examination if he he could use my help, but he told he he had 40 examiners, so I didn’t help there this year as a Volunteer Examiner. 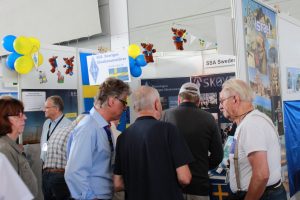 The stand of the swedish amateur radio society SSA.

Most of the time I’ve been at the stand of the swedish amateur radio society, where I told people about the longwave transmitter SAQ and why this UNESCO world heritage is something special that should be kept in a the good state it is so future generations can learn things from it. Of course you could also find a moose at the stand. 🙂

It has been a really great experience to participate as an exhibitor and if my help is wanted in the future I’ll gladly join again. It has been very cool to have many conversations in Swedish and English. Especially in Swedish it has been cool to get some practice. Thank you Anders, SM6CNN och Hans-Christian, SM6ZEM that you have invited me. 🙂 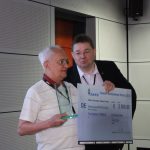 Where else do you have the possibility to talk to people from that many countries and learn new things? 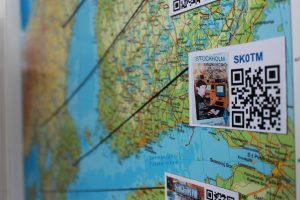 At the stand of the swedish amateur radio society: A map with destinations in sweden 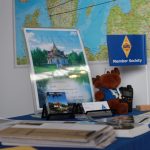 The stand of the SSA

See you next year in Friedrichshafen!

It was great having you with us in the SSA stand. See you again next year Joshua.
73/Anders SM6CNN